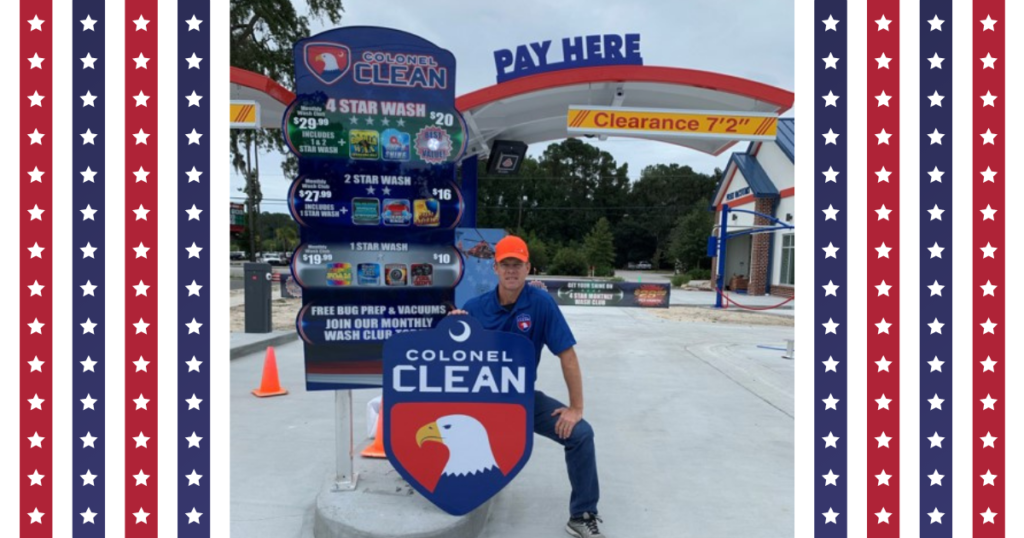 When Lex Brown retired from the United States Marine Corps after serving 25 years and multiple tours of duty, it’s not surprising that the next chapters in his storied career would include unchartered waters. While it’s not unusual for retired military personnel to explore entrepreneurship, Lex admits he hadn’t previously considered owning and operating a car wash. That was until one of his flight students, who also happened to be a multi-unit car wash owner, walked him through one of his high-tech facilities and ignited the engine that would become Colonel Clean Car Wash.

Lex Brown envisioned a military-themed car wash to serve his Beaufort, South Carolina community, an area rich in military tradition. Utilizing his background as a Marine Corps F-18 Hornet fighter pilot with multiple tours of duty at the Marine Corps Station, Lex’s next mission began to take shape. “I wanted to open a business that would honor the military, first responders, our fallen heroes, and all the families that sacrifice so much every day for our country’s freedom.”

Technology would play a major role in the development of Colonel Clean. Not only did Lex invest in the latest U.S. manufactured equipment and eco-friendly wash processes, but he also partnered with New Jersey-based Micrologic Associates for best-in-class car wash operations. Colonel Clean opened in November 2020 with an official ribbon cutting in January 2021. Recently, Lex shared a few key success factors as Colonel Clean closes in on one year in operation.

Prioritize Service to the Community

Beaufort is a military town with a large population of active-duty personnel, treasured military veterans, first responders, and their families. Colonel Clean’s military theme is clean, crisp, community and customer focused which is universally appealing. Their fundraising program and partnership with Wounded Warriors cements Colonel Clean’s commitment to service.

Lex Brown’s experience in the Marine Corps not only drives his success as a leader but informs the everyday operations of his car wash. “The structure that’s inherent within a military operation has been applied to a car wash operation and these fit together very well”, says Lex.

Streamline Learning and Operations with Micrologic

Technology would play a major role in the development of Colonel Clean. In partnering with New Jersey-based Micrologic Associates, Lex installed best-in-class car wash management solutions and eco-friendly wash processes. As a technology-driven company, Micrologic provided Lex with leading-edge solutions to maximize and focus on the growth and management of his revenue and monthly wash programs.

“Coming into the car wash business with zero background, I wanted something I could easily learn on my own and operate from day one, and Micrologic rose to the top with that criterion.”  When asked to name a standout Micrologic product, Lex appreciates most the ease of use with the Micrologic Visual Queue. It helps to see a picture of the car in real-time which keeps order and even aids in training attendees.

Indeed, Lex’s vision and execution has propelled Colonel Clean Car Wash to shining star status in the car wash industry, poised for growth and positive impact on the local community. In closing, Lex offers lessons learned from the early days of his car wash adventure.

As we honor our finest and bravest on Veterans Day, we applaud the service, dedication, tenacity, grit, and drive of our treasured military veterans like Lex Brown.

Optimize Every Aspect of your Car Wash Operations with Micrologic